This is from an appearance by Andrew Anglin on a Talkshoe program called Iconoclast with a host named Paul Ironshore, in 2012.

The Iconoclast page on Talkshoe is evidently disabled. The Iconoclastradio.com website is now defunct. Andrew Anglin has claimed having bought the rights to this podcast, but that is bullshit because all Talkshoe recordings are made under Creative Commons non-commercial share-alike license which by its own terms, cannot be changed after publication. As of February 21st, 2017 the podcast is still available at Talkshoe http://recordings.talkshoe.com/TC-80448/TS-584272.mp3. If not, download it here: Original Iconoclast program saved from Talkshoe

After the 3-minute mark Andrew Anglin is heard to say "Mixed races will be a positive progression for everyone ... I think the White race should be bred out..."

The host also promoted race-mixing. The entire episode in mp3 format is linked below. We borrowed some excerpts of statements by Anglin from another website:

Andrew Anglin: I’m hanging out with Philippinos, man. How are you gonna say that Philippinos are weak because of their genetics? And any Philippino who you give a cell phone to is gonna use it and they’re gonna start text-messaging and it’s gonna change their entire environment!

Andrew Anglin: I don’t know, man. When people have the capacity to abuse other people, they do it. So, I mean, what are we gonna do about that? … So I mean, I understand where you’re coming from with how all these people are Jews but I mean that’s just obvious because Jews are genetically bred to be more intelligent than everybody else. Of course they’re running everything. … I’ve had a lot of Jewish friends, man. They don’t have any divorced parents. They don’t have any of this shit. I mean, they have a much more intelligent way of running their lives. They’re smarter than us. … Do you think, that if somebody else had the capacity to do this, that they wouldn’t be doing it?

Andrew Anglin: IQ, which is a fucking racist concept, it’s bullshit, man. I know, it’s a racist concept. … But is this Jewish cult, is its purpose not just to defend itself? And is that not a logical purpose to have?

Andrew Anglin: I’m alright. … How are we going to stop genetic engineering without a world government? I mean, we’re going to have to have a world government for everyone on the planet… If technology didn’t exist, would any of this be a problem? That’s what I’m asking you. Because it wasn’t for how many millions of years. It wasn’t a fuckin problem. We’ve got records of shit and people did not fuckin’ destroy themselves for so many millions of years. And now we’re in a situation where people are destroying themselves.

Andrew Anglin: Okay, I’m going to go ahead and take a bathroom break okay? Is that cool? … Look man, I wanna support you. Cuz I don’t really give a fuck about any of the things we’re disagreeing about. I mean, whatever! Because, man, I mean, I know you’re for real. And I don’t know anybody else that’s for real so who else am I gonna be interested in talking to? But talking about 9/11 is non-sense. I mean, anybody that doesn’t get it by now? Jesus Christ. What more do we need, that we gotta keep talking about this shit for 15 fuckin years?! Every single one of these people is full of shit. I mean, that’s a really important point. There’s not one that we can point to. … But why should black people be forced into this system? They were never going to invent this system. Neither were Philipinos, neither were Malaysians. The only people who would have ever invented this system are white people and Chinese. So why should everyone else be forced into it. You see the way white people – and it IS white people – went around the whole world and FUCKED everybody and made them accept this shit: Christianity and money! That happened, man. I mean, that’s just a fact of history. … Like, Leave It To Beaver? That’s fake.

Andrew Anglin: I don’t hate myself. I mean, uh, obviously my race is powerful, uh, I guess. … I think we need more mixed races. Mixed races would be a positive progression for everyone. … I think the white race should be bred out. This is dangerous to have these people.

Andrew Anglin: He thinks white people should all breed together? Well fuck that shit, man! That’s stupid! What I care about is human beings and the species, you know?” 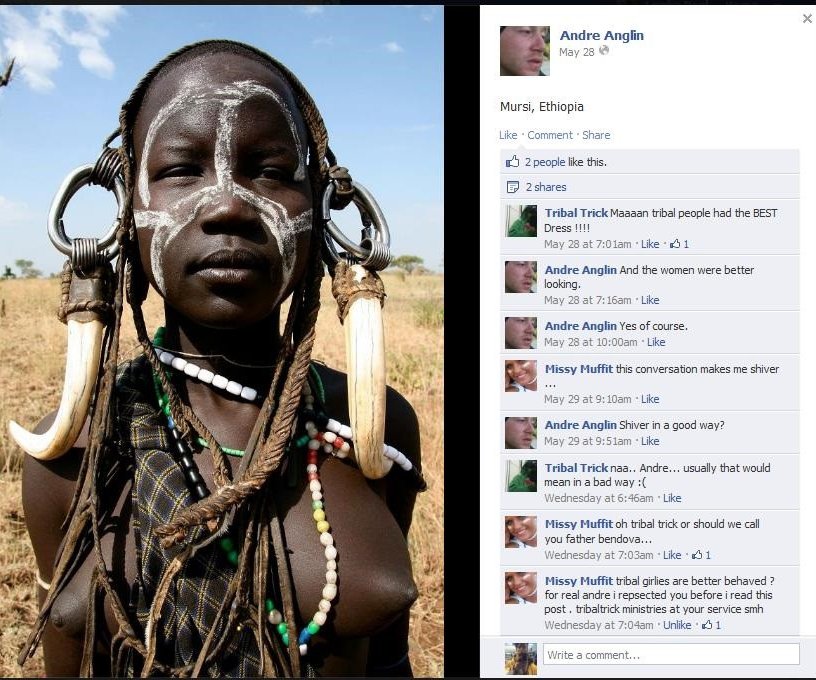 Maybe all of this is the beginning of why Andrew Anglin hates CI and purposely tries to oppress it.